Advanced Engineering Building, The University of Queensland
Adults $30, Concessions $26, Students $12 and under 5 free
Tickets may be purchased by calling Maree Williamson on (07) 3378 2384 or at the door

Church of Christ Kenmore Community Centre
41, Brookfield Rd. Kenmore
Adults $30, Concessions $26, Students $12 and under 5 free
Book on line – trybooking.com/BXLCO – tickets at the door if not previously sold out.

The Brisbane City Pops Orchestra is excited to be preparing for our first concert of 2022. We have chosen a program full of beautiful and varied music that is sure to lift your spirits and warm your hearts as we look towards a brighter future (without Covid). I’m sure you will agree, it will seem like A Whole New World!

We have included some favourite classical pieces, such as the exciting Marriage of Figaro Overture by Mozart, the very beautiful Largo from The New World Symphony by Dvorak, Roses from the South, a wonderful waltz medley by Johann Strauss and the unique melodies of the Procession of the Sardar by Ippolitov-Ivanov.

The audience will also be taken on a trip down memory lane with some golden oldies from our selection entitled Thanks for the Memory.

The orchestra is also looking forward to bringing you music from some well-known and very successful films. These include a medley from Chicago, featuring some great jazz pieces, great atmospheric music from Apollo 13, and a very beautiful and light-hearted medley from the wonderful movie Aladdin. You will also enjoy a trip Around the World in Eighty Days with a fantastic arrangement of the movie music by our very own conductor, Andrew Robinson!

The BCPO is thrilled to be showcasing a very talented 16-year-old violinist, Morgan Ip, as our guest artist. Morgan began learning violin at the age of 4 and achieved his A MusA at 14. He has been studying with well-known teacher Elizabeth Morgan AM and plays with the Queensland Youth Symphony. Morgan will be performing two well-loved violin solos – Zigeuerweisen by Sarasate and Meditation from Thais by Massenet.

As you can see, this concert is full of amazing and thoroughly entertaining music, with something for all tastes. Please join us for a great afternoon as we celebrate the coming of A Whole New World!! 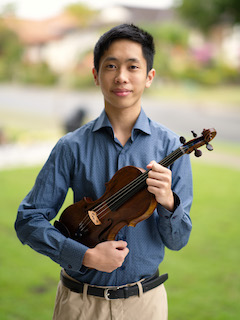 Morgan Ip is a 16-year-old violinist and is currently studying with Elizabeth Morgan AM since 2016. Having begun the violin at 4 years old in Hong Kong, Morgan achieved his Grade 8 ABRSM in Hong Kong at 9 years old, and his Amus Violin at 14 years old. He was offered an entry to Mansfield State High School for its music accelerando program in 2017 and is currently concertmaster of his school’s top string ensemble, Camerata, a position he has held since grade 9.